As fundraisers, one of the most exciting parts of our job is seeing the results of a campaign: the response rates, the gifts, and the income. It’s easy to get absorbed in using these numbers to measure success, and forget the immeasurable impact we are making. Seeing our clients in action helps us take a step back and see the larger scope of our work, and how critical it is to an organization’s mission. Over the past few weeks we’ve had the pleasure of attending two events with the United States Holocaust Memorial Museum, seeing first hand some of the programs that our team helps to support. 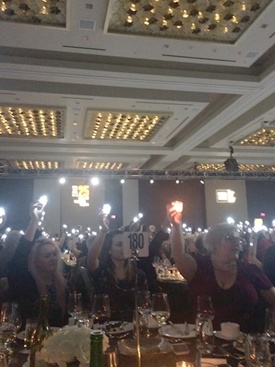 Attending the National Tribute dinner was an experience to remember. We found ourselves surrounded by individuals who deeply care about the Museum that we work hard to support every day. Employees, members, and Holocaust survivors—the room was filled with passion for the Museum’s mission.  Many of these attendees are familiar with our campaigns and are routine donors.

This year’s program focused heavily on one of the Museum’s core missions—continuing to tell the story of the Holocaust for the years to come, and the importance of speaking for survivors who are no longer with us. It was amazing to realize the role our work played in this noble mission, and it was fun to see a lot of the campaigns we produce in Direct Mail and Digital used throughout the program as well.

On April 23rdthe Museum opened a brand-new exhibit, Americans and the Holocaust. After working on a mail package and digital fundraising emails about the opening, it was so rewarding to see the newest special exhibit in person!

Visitors to the Museum, like us, will be able to engage in a conversation about accountability, indifference, and the role the United States did (or didn’t) play in the Holocaust. With state of the art technology and interactive content, the exhibit captured our attention from the second we entered.

One of our favorite parts of the exhibit featured polls taken during World War II about American’s feelings towards the war and the turmoil over seas: there are many opportunities to apply the same questions today. Another favorite display was a collection of documents that survivors have loaned to the exhibit—the same documents once saved their lives by getting them out of occupied areas and into safer zones like the United States.

Creating tangible change by bringing attention to the misconceptions of history and encouraging people to have difficult conversations is one of the most rewarding parts of being fundraisers for the Museum!

Witnessing these events was truly special for us, as a team and as individuals. It allowed for us to see the strides the Museum is making in our community and in the world, and provided both campaign inspiration and motivation to support their work. Seeing CCAH’s role in the grand scheme of the Museum will help us craft messages that truly capture the importance of preserving the legacy of a survivor, and bringing attention to the ever-relevant lessons of the Holocaust.